The low pressure systems are following each other in the North Atlantic. A real headache for Eric Bellion. 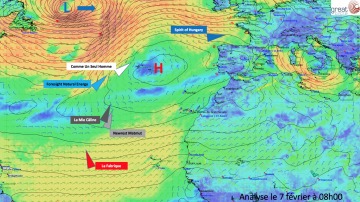 © Great CircleNandor Fa is now sailing in a north-westerly wind which should decrease until he crosses the finish line on Wednesday morning.

The North Atlantic depressions are a real headache for the following skippers. Eric Bellion should be the next to cross the finish line at the weekend. Before he gets there, he has to deal with a low pressure system moving from North to South off Spain. He needs to sail fast in order to stay south of this system. He will then be able to sail along the Portuguese and the Spanish coast in southerly winds. He will probably finish with north-easterly winds.

For Conrad Colman, things are not any easier. He will cross a front tonight with a big wind shift to the North West.

Behind, Fabrice Amedeo and Arnaud Boissières are getting closer to the Azores high. 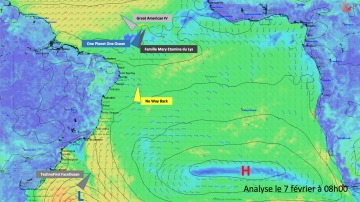 © Great CircleThe wind is getting light for them. Alan Roura and Rich Wilson are reaching in the trade winds while Didac Costa and Romain Attanasio are slowed down in the Doldrums. No Way Back should get there by Thursday and Sébastien Destremau is sailing towards the junction with the trade winds off Rio de Janeiro.