The conditions are improving for all the skippers except for Eric Bellion who is sailing upwind in strong winds. 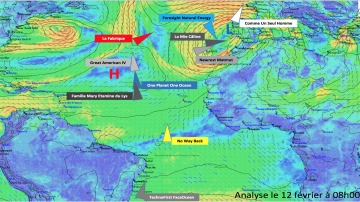 © Great CircleEric Bellion is sailing upwind in winds superior to 30 knots. The wind should shift Southeast  (30-35 knots) at the end of the day, which will allow him to accelerate.

The conditions are improving for Conrad Colman. The wind speed is decreasing and it should shift from NW to SW from tomorrow. The conditions should remain favorable several days for the Newzealander skipper.

Fabrice Amedeo and Arnaud Boissières are sailing in a NW'ly wind which should shift to the SW off Portugal.

The weather transitions are still complex for Alan Roura.

Rich Wilson is going to cross the Azores high while Didac Costa and Romain Attanasio are reaching in the trade winds.

Pieter Heerema should get out  of the Doldrums on Monday while Sébastien Destremau is still sailing in the trade winds.