Since last night Conrad Colman has been back under sail, albeit making just 3kts of boat speed to the north west, but the Kiwi skipper whose mast broke four days ago has successfully set a jury rig now fashioned from the bottom of the mainsail of Foresight Natural Energy. According to his team he has not yet managed to set a foresail but intends to. He has already crossed the course he was taking when his mast fell.

Arnaud Boissières, just north of La Coruna this morning, is just slightly behind his routing and so that means that he has missed the last of the SW'ly breeze and now, instead, is into messy light E'lies which will mean a beat for him right to the finish. La Mie Câline now looks more likely to finish Friday morning. Fabrice Amedeo is 290 miles behind on Newrest-Matmut and has 15-20kts of SE'ly wind which he will hold for much of the day until he gets closer to Cape Finisterre tonight when the breeze will ease closer to 8-10kts. He will not be as upwind across the Bay of Biscay and should make it to the finish line in 11th place on one tack, around 24-30 hours after Boissières. 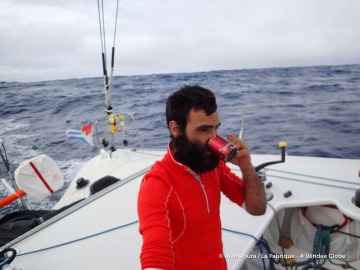 A special moment should occur later today for Alan Roura on La Fabrique. As the breeze rotates from the SW to the S this afternoon he should make the gybe on to his layline for Les Sables d'Olonne where he is now expected on Sunday night or Monday. Roura is 600 miles behind Amedeo. in 14th Rich Wilson has gybed on Great American and is heading just south of the Azores and has SW'ly winds of around 15kts and is just skirting around the Azores high pressure area, closely monitoring the Atlantic low to his north and west. He is 444 miles behind Roura. 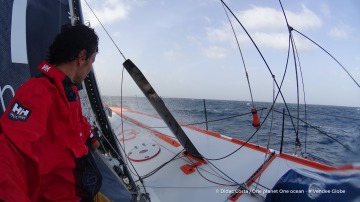 Didac Costa has had better winds and has therefore made a fairly definitive break away from Romain Attanasio. From beiing less than 50 miles apart, the Spanish skipper is now nearly 200 miles ahead. Pieter Heerema (No Way Back) is now bouncing and banging upwind in the NE'ly trade winds, 1170 miles behind Attanasio. Life is unpleasant, loud and wet on deck but he is making 10.5kts and tomorrow night will be at the latitude of the Cape Verdes. And Sébastien Destremau (TechnoFirst-Face Ocean) is now just 65 miles offshore of Recife in an E'ly trade wind, 300 miles to Fernando de Noronha where he plans to stop and dive to check his saildrive and see why he has a small leak into his engine bay.