Home News What are the weather constraints with a jury rig?

Sailing with a jury rig is not an easy task. You have a lot of constraints if you want to keep moving without beeing in danger. The shortest route is not always the fastest one. 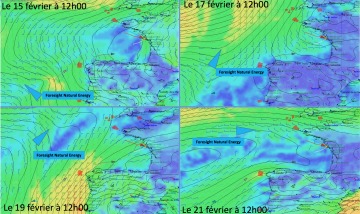 © Great CircleThe constraints for Conrad Colman who is now sailing with his jury rig  are multiple. He has to avoid the light wind zones where he would be unable to move forward with his reduced sail area. Sailing at less than 90° to the wind is not really recommended. The sail plan is not suitable and it could put too much strain on the rig when the wind strengthens. In the lighter winds, the tacking angles would be catastrophic. If we summarize the specifications, the ideal, under a jury-rig is to sail in moderate winds at an angle which is above 90 degrees.

For Conrad Colman, we do not know at what speed he will progress when the wind is stronger. We can however guess that he will try to avoid the southern part of the Bay of Biscay where the wind will be light and blowing from the East from Saturday. His strategy could therefore be to sail northward to position himself north of the Azores high and the associated ridge (in blue on the chart). He could then sail in westerly winds which will strengthen over the next few days and will push him towards the finish line in Les Sables d'Olonne by the end of next week. 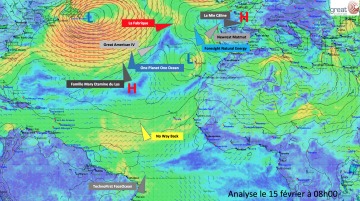