> News > Most of the fleet is rounding the Azores high 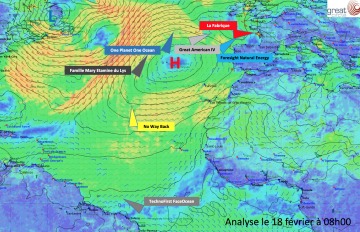 © Great CircleAlan Roura was under the influence of the Azores high until this morning,  He is now getting out of the Westerly wind flow. He will be sailing in light wind conditions up to the finishing line in the Sables d'Olonne.

Behind him, Conrad Colman, Rich Wilson, Didac Costa, Romain Attanasio and Pieter Heerema are under the influence of this anticyclone. The wind turns clockwise around its center (H on the chart). The objective thus is to round it downwind by the West.

Sébastien Destremau is sloewed down by the doldrums, probably till the end of the weekend