Home News Heerema: “Once you start something you have to finish it”

Heerema: “Once you start something you have to finish it”

Pieter Heerema was finally able to enter the harbour in Les Sables d’Olonne this morning. After crossing the finish in seventeenth place yesterday evening, he had to remain on board No Way Back until high tide this morning. He was greeted by the crowds as has been the case for all of the skippers finishing this eighth Vendée Globe. On his arrival at the pontoon, he made his first declarations and then thanked all his supporters, many of whom had made the journey to Vendée to welcome him home. He gave us his first thoughts on completing the non-stop solo round the world race.

Hard times?
There have been some very difficult moments. The technical breakdowns but with the support of people, people on facebook for example showed such support that even if I was so slow, I had to continue. The mechanical things were not serious, but the electronics…

Back again next time?
The whole project was astonishing and now the mission is complete. I won’t be here in 4 years, because I’m now 65. I have seen it. I have done it, but sailing is my life. I want to sell the boat. I have some other plans.

The foils?
The foils were not a good choice for me. I had never sailed on an IMOCA a year before and never alone six months before, so the learning curve was straight up. The foils were an extra complication. Yesterday was the only real race days. I was a little unlucky as I did something with the rudder and lost an hour. Otherwise I could have come in last night.

No Way Back?
This is an excellent boat. There is no delamination. No Way Back, because once you start something you have to finish it.

“116 days. 4 months. It’s a really long time. Alone. But that’s not the worst. Everyday something happens. There are some nice moments, but also a lot of difficult moments.”

“I had planned to be here on Monday, but there was a huge weather system and it was too dangerous to go into the Bay of Biscay. I had to wait off the coast of Portugal. It was weird, as I just had no goal any more. Being alone is not a problem. But it would be nice to choose when you are alone. 120 days alone is a bit long.” 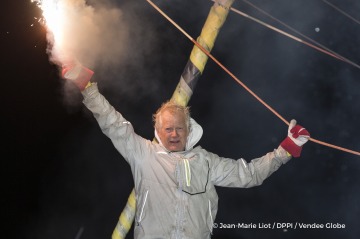 “There was one thing that started right away. And came back again and again. All the wizards looked at it, but it just wouldn’t work. I had three capsizes one night. I went out each morning and said Wow the mast is still standing. That problem stayed with me until Australia. Then I said forget it. I’ll do it my way without that system, so I was slower.”

“It’s not super important to be the first Dutchman. I have done it, which is the most important thing.”

“I would do it again and on this boat, but it was the wrong boat for me. It was too much to learn in a very short time. It was so physical. I wore knee pads 24 hours a day as you bounce around. It’s violent. For an old fogey like me, it’s too much.”

“Age is a strength and handicap. A few years ago I was sailing off Alaska with my daughter. We walked up to see the bears. We saw a young bear jumping around. Then an old bear came out – I said here comes experience. The old bear sat there doing nothing, while the young bear was in and out of the water trying to catch fish but not succeeding, while the old bear just got one each time. That’s experience.”