Home News A look back at Pieter Heerema’s press conference

A look back at Pieter Heerema’s press conference

After finishing yesterday evening at 2126hrs UTC in 17th position in the 8th Vendée Globe, Dutch skipper Pieter Heerema (No Way Back) entered the harbor in Les Sables d’Olonne this morning at 0800hrs UTC.

The boat
“There was a picture of a boat that was crossing the Alps from Italy. The project collapsed, because of financial difficulties. I had no idea what sort of boat it was. I had no clue about foils, masts with various angles, but I decided to go for it. This is the most modern, most aggressive and most physical boat of the type. I had to wear knee pads. You have to crawl through the boat. This was the wrong boat for me, but I had no choice.”

Dutch courage
“I noticed during the race that the Vendée Globe has become known in Holland. It is now in a much wider circle. It would be fantastic if in future editions other skippers from Holland took part.”

Regrets
“I was not ready. The Vendée Globe came one year too early. The adventurers had all done this sort of thing before. I had never sailed alone until six months before the start.”

Motivation
“I don’t know what I was looking for. It’s a good feeling to have done it. The start and the finish is fantastic, but everything in between is difficult. In 116 days there were very few moments of pleasure. There are other ways to enjoy yourself.”

The other competitors
“I think this was an extraordinary edition. Usually the front runs away but then gets caught. But this time they just kept going. At the back we were beating upwind. The differences between groups of racers just grew and grew. I take my hat off to Armel and Alex. This is a different level of racing from wha I am used to. You can only have the deepest respect for such guys. The same for Didac Costa and Alan Roura. It was amazing. You only understand that when you have done it.”

What next?
“I’m going back to my old love, the Dragon. Then, there are some interesting possibilities in sailing – the TP52, the Jules Verne Trophy, the new Melges… I have the time to think about that now. I already have a shed full of boats, so I must sell this boat. If I don’t sell it it would be nice to do the Transat Jacques Vabre, but my first priority is to sell the boat.”

Dutch pride
“Holland has a long history. The capes are Dutch. The Horn, Leeuwin and Good Hope are all Dutch capes! It was a home race for me.”

Discovering Facebook
“At some times, you don’t see the light any more. Somewhere south of Australia I had had it. People sent me messages. Facebook in particular from people… I have no clue who they are. It’s been a huge support. I told myself I’m going to show them, I can do it, however long it takes.
I had never been on Facebook before. It took me ages to learn. For some reason what I did attracted people and I had so much support. That really pushed me to go on. I thank all the people on Facebook for pushing me and all the funny messages.”

No Way Back
“I had used the name No Way Back before. But it has a meaning too. I think that once you decide something, you have to do it. That’s a life principle for me and I hate other people who go wishy-washy.” 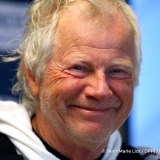 Heerema: “Once you start something you have to finish it”