Armel, how is your return to normal life going after your exceptional Vendée Globe?

Armel Le Cléac’h: “It’s going well. I’ve been making the most of the victory, which rewarded ten years of work. I have had a very busy schedule since the finish with a marathon in front of the media. I had two or three incredibly busy weeks. It was like being in a whirlwind. But I managed to get a few days off with my family to get away from things. Since I got back, the requests from media and sponsors have been pouring in. It’s been very busy, but I enjoy those moments.”

Now you have had time to stand back, do you understand the full extent of what you accomplished?

“Yes, I can see things more clearly than when I finished in Les Sables d’Olonne. I’m gradually understanding that we did something remarkable with the team. I also understood the impact of the Vendée Globe on the public and media. The race was followed by a lot of people. I already saw the fervour around the event four years ago, but it’s clear that interest has grown considerably with this eighth edition. The fact that I won also changed things. You are treated differently as the winner. People recognise me in the street now (laughs)!”

“Physically, I haven’t yet recovered”

In order to win the Vendée Globe, you had to did deep physically and mentally. Have you recovered now?

“No, not yet. Mentally, I’m gradually returning to Earth. Physically, I feel better, but I haven’t yet got over it. Everything you do requires a lot of concentration and that generates tiredness. You have to deal with that to recover gradually as the weeks go by. I have to sift through all the requests. I could spend two years going around to all the schools, who have asked me to be their patron of honour. But I can’t do all that. I’ll shortly be returning to the sport.” 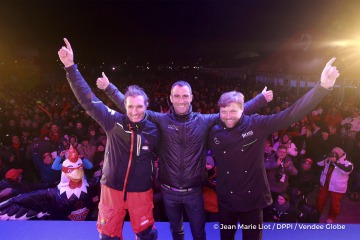 Apart from the race and the epic duel with Alex Thomson, what else has left its mark on you in this eighth Vendée Globe?
“There were various races within the race, which made it all fascinating. The close battle between Jean-Pierre Dick, Yann Eliès and Jean Le Cam was incredible. There were also some pleasant surprises like Eric Bellion, who made a lot of progress during his Vendée Globe while remaining humble. It was quite a performance. As was what Conrad Colman achieved in making it back to Les Sables under jury rig: incredible! I can’t mention all the skippers but I saw there were eighteen boats at the finish and that is good. We need as many boats as possible to return to enable these projects to succeed. When you see the impact on people and the media of these finishes in Les Sables… Each sponsor who completes the race has achieved a win. I wasn’t able to attend all the finishes, but like many people I followed them on Internet. I really enjoyed seeing these great pictures, seeing the joy and emotion on the faces of all those that made it back to Les Sables d’Olonne. I’ll see them all at the prize-giving ceremony on 13th May.”

There was a gap of fifty days between you and the final competitor, Sébastien Destremau (compared to 26 between François Gabart and Alessandro di Benedetto 4 years ago). How do you feel about those numbers?

“It’s not really a surprise in my opinion. Before the start, we knew that there would be huge gaps at the finish. There is a big difference between those aiming for a good result and those who see it as an adventure above all.  The preparation, the performance of the boats, the experience of the sailors: all of that together means big gaps. Everyone does it at their pace depending on their ability and experience.”

“It saddens me to see arguments between competitors”

With some aiming to win and others not aiming for anything particular in the rankings, how is it possible to bring everyone together?

“Firstly, I’d like to say it saddens me to see arguments developing between sailors via the media. There’s no reason to display that in front of the media. You can pick up the phone and say what you think directly to the person. It’s easier and more efficient… Having said that, I think it is important to keep those two dimensions with very different projects – those aiming to win and those looking for adventure with less funding. That doesn’t bother me.

The Vendée Globe is like a marathon, with some taking two hours and others 5-6 hours finishing the race at their own pace. But from the first to last, they are all there to compete and see their time in the rankings. What I mean is that people shouldn’t denigrate the sporting aspect. They should show some respect for the race they are taking part in. If you don’t like competing and fighting against others, you can sail around the world outside of the race and just cruise around.”

Are you in a hurry to get back on a boat?
“No, I don’t really feel the need to get back out there immediately. I’m not like some, who are already out there on their Figaro boats, which is brave of them. I did that myself after my previous two Vendée Globe races. I wanted to get out there on the attack again to forget the disappointment of coming second. This time the situation is very different. I’m going to take advantage of the coming weeks to get over winning the race. Sailing is not my current priority. When I have the time, I do other things, take advantage of life ashore. I have a boat that is being built. When she is in the water, I’ll be very busy once again.”

“My Ultime is due to be launched in August”

How is the construction of your maxi trimaran Banque Populaire IX going and what is your race programme?

“Banque Populaire IX is in the assembly phase: the three hulls, crossbeams and mast have arrived at CDK in Lorient (Brittany). Everything is going well and the pieces of the puzzle are gradually coming together. Banque Populaire IX will be a fantastic boat with the very latest ideas, foils to lift her. She is due to be launched in August. I’ll take part in the Transat Jacques Vabre at the end of the year. That will be our first race. We’ll remain humble tackling that, as we won’t have had much time to get to know the boat and unleash her full potential. But it will be an opportunity to race across the Atlantic. Then, there will be the delivery trip back to Brittany.

Then, it will be time to look at the 2018 programme with a schedule set up with the other Ultime boats. There is likely to be a crewed race in the spring, and then I’ll take part in the Route du Rhum. Along with the Vendée Globe, it’s the other victory to aim for, when you are an ocean racer. I’d like to get my revenge after my bad luck in 2014, when I was unable to take part because I was injured. Then, in 2019, I’ll take part in the famous solo round the world race on the Ultime setting out from Brest. There are going to be some big names -  François Gabart, Thomas Coville, Sébastien Josse, and maybe Francis Joyon...” 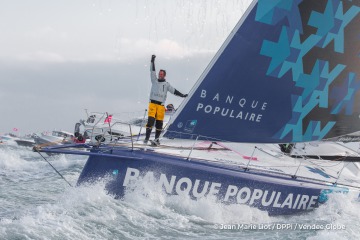 You haven’t been back aboard your IMOCA Banque Populaire VIII since you stepped ashore on 19th January. You must have grown attached to her? Wasn’t it hard suddenly leaving her?

“I didn’t feel any sense of separation. I knew before the start that the boat was sold and that we would no longer be together after the Vendée Globe. I am committed to another project and the story continues for the boat, which will line up again in the 2020 Vendée Globe in the hands of Louis Burton. The handover is complete. Louis and his team asked if I could spend a couple of days aboard with them. Why not? It will be nice to sail her again and to offer them my experience.”

We know that you won’t be back in 2020 in the Vendée Globe. But maybe some time in the future?

“No, I’ll never do the Vendée Globe again. My programme continues aboard an Ultime. Since the start of my career, I have taken things step by step. After the solo round the world voyage in 2019, I’d like to sail with a crew, and maybe sail around the world… I also want to share experiences with others and sail with a crew.” 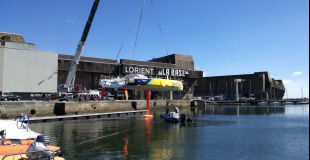 Bureau Vallée 2 back in the water in Brittany 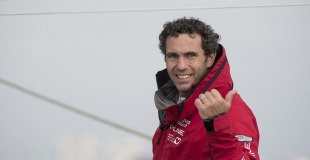 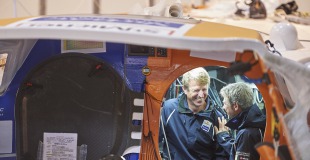 Yann Eliès with Jean-Pierre Dick for the Transat Jacques Vabre