Skippered by Morgan Lagravière and his crew, Safran dominated the four days of sailing in the Guyader Grand Prix, which involved both coastal courses and speed runs off Douarnenez. Jean Le Cam and Jean-Pierre Dick took the remaining places on the podium in this first post-Vendée test ahead of Paul Meilhat and Yoann Richomme.

Strong winds, moderate conditions, light airs: during the four days of the Guyader Grand Prix, the fleet of five IMOCAs taking part faced a wide range of conditions in Douarnenez Bay. There was a lot to learn because of that. 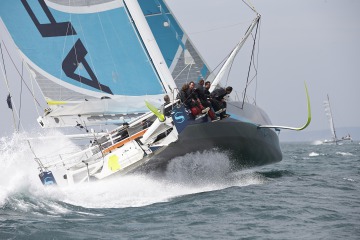 © Jacques VapillonIn all, they raced on four coa       stal courses. Morgan Lagravière and the crew of Safran won two of them. The same boat won three speed run sessions showing impressive speed each time and thrilling the spectators and media. Quite logically, Morgan Lagravière won the Guyader Grand Prix, in which he was competing for the first time. “This is one of the only events where we race as a crew, so we decided to take the whole of the shore team aboard,” explained Morgan. “It’s nice to be able to share this win with everyone, who worked so hard ashore. For me, it was great getting back out there racing.” 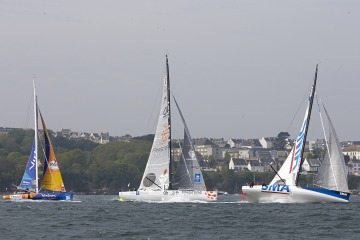 © Jacques VapillonBehind the young skipper on Safran, there were two IMOCA “old timers,” who have both taken part four times in the Vendée Globe: Jean Le Cam (2nd) and Jean-Pierre Dick (3rd). Just off the podium, there was Paul Meilhat and his crew on SMA, which has just come out of the yard and is fitted with a foil on the starboard side. The first results concerning this appendage appear to have been pleasing. Paul Meilhat: “The foil gave us some encouraging feelings, which I hadn’t experienced 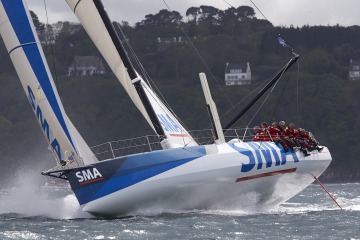 © Jacques Vapillonbefore. It’s a pity we weren’t able to make more of it, particularly in the runs, but we weren’t on the right tack to do that. On Friday, we even did one tack outside of the race in more suitable conditions, to be able to use the foil, and we reached unprecedented speeds for this boat. For several minutes we were going at 26-27 knots, which is something we had never done on flat calm seas.” For his first major event on an IMOCA, Yoann Richomme (5th) learnt a lot during these four days in Douarnenez Bay. Aboard Vivo Abeira (Sam Davies’s former Saveol), the winner of the 2016 Solitaire du Figaro was trying to settle in to prepare for the Transat Jacques Vabre in which he will race with Pierre Lacaze.