In spite of both skippers being forced to retire from the last Vendée Globe, Le Souffle du Nord and Kilcullen Team Ireland are now getting together to complete their round the world voyage next winter. This joint project will display the colours of Le Souffle du Nord and Team Ireland. Enda O'Coineen will be the skipper of this return voyage from New Zealand to France and the ambassador for the two projects.

They were two rival teams in the 2016-2017 Vendée Globe, but both were unlucky a few days apart halfway through the race and their dreams ended off New Zealand. Firstly on 18th December 2016, Thomas Ruyant, aboard the IMOCA 60 Le Souffle du Nord pour Le Projet Imagine, collided with a UFO. The skipper showed great courage and fought hard to bring his boat ashore safely to the port of Bluff in the south of New Zealand, before finally making her safe in Dunedin. On 1st of January 2017, Enda O’Coineen (Kilcullen Team Ireland) dismasted 200 miles south of New Zealand. He would also bring his boat into the port of Dunedin. 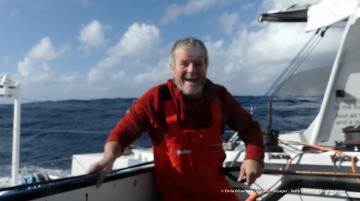 Since suffering this damage and retiring from the Vendée Globe in more or less the same zone and at the same time, the two teams have been thinking about how to proceed and it became an obsession. For the team from the North of France, the goal was to bring their boat home to Dunkirk to continue to convey their charitable message around the world. For the Irishman with his unique character, there was the determination to complete his Vendée Globe. He got into contact with Le Souffle du Nord to find out more about the state of the boat, which is still in New Zealand. That was at a time when the French team were working on a project to get the boat back in shape with the support of their partners and sponsors, who so enjoyed the first half of the round the world voyage.

In late May 2017, the decision was taken: the two teams would come together in a joint project to complete their Vendée Globe and their round the world voyages. As they wanted to carry out this return journey in safety, it will be exactly one year after it all suddenly came to an end that Enda O’Coineen will set sail from New Zealand aboard the 60-foot monohull, Le Souffle du Nord - Team Ireland. 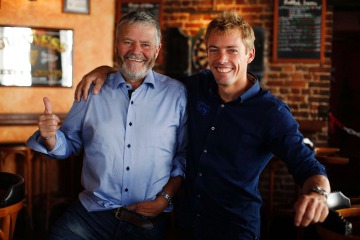 Thomas Ruyant: “I’m really pleased to see the IMOCA Le Souffle du Nord again! It was most upsetting for me to have to leave her like that on the other side of the world. I’m proud to be able to pass her on to another competitor from the Vendée Globe, Enda, who also conveys a message concerning the spirit of adventure and solidarity. This joint effort by the two teams is unprecedented. Its shows that anything is possible and that dreams can come true. Personally, I hope by then to have set up my own project for the 2020 Vendée Globe after attracting new partners and I’ll be following Enda during his return voyage and will be there to welcome him home in Les Sables d’Olonne.”

Enda O’Coineen: “I am honoured to take over from Thomas Ruyant aboard Le Souffle du Nord pour Le Projet Imagine by by joining in with Kilcullen Team Ireland. I am very proud to be able to display the colours of the NGO and to help Le Souffle du Nord continue its mission. But I’m proud too to be able to continue to convey the message of Kilcullen Team Ireland around the world, in particular to promote the youth development programme, the Atlantic Youth Trust, an educational programme, which enables youngsters to discover the ocean, adventure and challenges. Finally, on a personal level, this project corresponds to my lifelong principle: I want to finish what I started and never give up. This is my way to contribute something to society and be seen as an example for young people.” 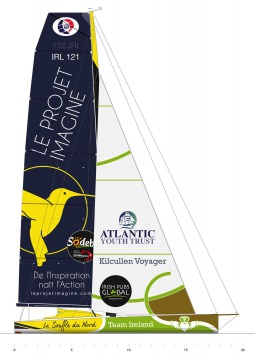 Sylvain Derreumaux: “This is a fantastic illustration of our message and values. In our lives, we all face obstacles. There are two ways to react: give in or bounce back. In December, we reacted 48 hours after our boat arrived in Bluff with a Haka to thank our brave skipper and our friends in New Zealand for their magnificent welcome. We added on the slogan, “A damaged boat isn’t going to stop us.” With this project we’re back in the game and will be bringing our boat home to France in style. This return will allow us to continue to convey the Imagine NGO’s message on our sails and with the hummingbird symbol, we invite everyone to come together to build a better world. This is a way to allow us to continue to promote this commitment and Enda will be a great ambassador for that.”

Sam Davies back for the 2020 Vendée Globe