Arnaud Boissières may not be Sablais by birth but since he moved there a dozen years ago, he has been adopted by the people of Les Sables d'Olonne pretty much as one of their own.  Now heading into a record fourth consecutive Vendée Globe, which would be a record, he has formed a strong bond with Manu Cousin, a much more recent incomer to Les Sables, who is aiming to race his first Vendée Globe in 2020.

"I'm doing my project as if it were the first one," enthuses Boissières, 12 years after his first project. He has matured a lot as a sailor and as an individual, seeking to add more relaibility and certainty into his new  project by bringing in Mer Agitée, the Port-La-Forêt based company of twice Vendée Globe winner Michel Desjoyeaux. Boissières still exudes that slight air of craziness but he is determined that this will be his best, most competitive project.

"A project like this one excites me in the technical aspect: taking a fairly old boat (formerly Mike Golding's Gamesa, a 2007 Owen-Clarke design) that we - my little team and Mer Agitée - have refitted like new."

Arnaud Boissières boat is the former Kilcullen Voyager of Enda O'Coineen on which he had to retire into New Zealand from the last race after the enigmatic Irish solo racer was dismasted. The boat has been lightened by several hundred kilos and has had foils fitted and completely reviewed from top to bottom.

"It has been a very intense, demanding, huge project this boat", says Boissières who has now sailed more than 4000 miles since May and now heads into the Drheam Cup as his first race, starting July 23rd. Michel Desjoyeaux, their friendship forged over two decades, will be with the La Mie Câline-Artipôle project himself right up to the Vendée Globe.

The support and friendship of Les Sables d'Olonne is very touching

Although he is from Arcachon originally, the Vendée people have taken Boissières to their heart, and he holds a deep affection and respect for them, 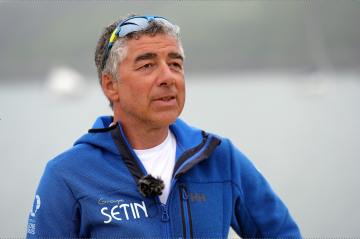 © Van Malleghem/Bermudes 1000 Races"The reception I get here is fantastic. My first sponsor (Akéna Vérandas) said to me that there was no local Vendée Globe and so to move here and settle in the town would be good. And they were right. I may be the Arcachonese adopted by Les Sables d'Olonne as one of their own but that fellowship is very touching."

The story of Manu Cousin and Les Sables d'Olonne has the hallmarks of a love story too. Since the age of 12, the Normandy native has been a lover of the Vendée town. "As soon as I was able to live here, and my eldst daughter was independent on her own, I came here to live with my wife. That was a moment in itself that we had looked forwards to so much." Before that, he was back and forth to his Class 40 in Port Olona every weekend. And now, at 51, he has put his career with Toyota on hold and has been based in Les Sables d'Olonne since last Autumn.

"We did not compromise on anything and I think Arnaud saw that and  he identified with that passion."

The pair first met in 2014 when they agreed Boissières would race the Route du Rhum on Cousin's Class40. And that is where the bond between the two was really cemented. And when Arnaud prepared for the 2016 Vendée Globe, Cousin was there with him helping and on his invitation brought along Eric Sétin of the Sétin group who was a client for 20 years and who sponsored his Class40.

"The start of the Vendée Globe is inspirational. It's so strong, it's something that touches your heart, your everything with all these 300,000 spectators. " Cousin explains : "Eric Sétin was touched, he is very human. And a few weeks after Arnaud's return, he came to me and said: "Look it has been been four years that we have been with you in the lower category and it's going well. So let's step up to the Imoca!"   And so in the last Transat Jacques Vabre, Boissières and Cousin raced together and finished 11th.   "Now I feel like I am living the dream", says Manu Cousin whose big, ever present smile does not mask his great determination.

Cousin affirms:  "But if I'm here today, it's because of dedication and hard work. And of course, I was working for more than 20 years elsewhere on dry land. I have always dreamed of the ocean and these great boats. The sailors I heard on the radio or on TV made me dream, now today, some are friends. But really, we must not believe that this thing happens on its own, we have to work so hard to make these dreams possible. "

These two friends, both residents of Les Sables d'Olonne, agree. "I am convinced that skippers in search of partners might do well to search in Les Sables d'Olonne and around here", says the skipper of La Mie Câline-Artipôle. "The passion, the atmosphere, the interest that surrounds the IMOCA is something big around Port Olona which has just hosted the J/80 World Championship and the start of the Golden Globe. And of course, the Tour de France has just passed. Retailers will stick up the posters and stickers for a few weeks after the Tour but for them the Vendée Globe is much, much more", emphasizes Arnaud Boissières. "It's a pride for them to host the Vendée Globe."