Roura's holidays have been short. After a major refit to the IMOCA which is new to him, fitting foils and qualifying the boat for the Route du Rhum, on July's Drheam Cup - 736 nms round the Fastnet from Cherbourg - there was only just enough time for a few weeks off. Just one week after the boat was relaunced and with just one foil fitted Roura finished a promising sixth.
Next, before the 4th November start of La Route du Rhum, is the Azimut Challenge which most of the IMOCAs will compete in in mid-September. He will also do some other passages, out from Lorient to the Azores, solo outwards and crewed on the return leg, the best way to put the new learnings  to the test. 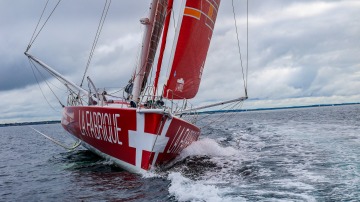 © La FabriqueThe partnership between Roura, 12th on last Vendée Globe, his first attempt and the Finot-Conq design has considerable potential. The boat was formerly MACSF of Bertrand de Broc who had to abandon into Fernando de Noronha after 13 days racing, but which finsihed ninth with de Broc in 2012-13. It has a fine pedigree, built as Armel Le Cléac'h's BritAir in 2007 for the 2008-9 race in which he finished second behind Michel Desjoyeaux.
But until now the boat which had the nickname 'coffre fort' (literally strong box/safe) because it is so robust has not changed much. That is until now when Roura and his team got their hands on it.
"I found it a bit strange  not to give a new life to this generation of boats built in 2007. There is not really much left but the hull, rudders, keel and we have refitted the whole boat." says the skipper who originates from Geneva.

First and most important change has been the addition of foils, designed by Jean-Marie Finot and Michel 'Mick' Kermarec, the foil specialist who worked with Oracle/Team USA.
"They, Jean-Marie and Mick, drew their own initial propostions and it turns out both were very close in ideas and specification, closer to what was seen on the last Vendée Globe, more of a turbo booster." explains Roura. "Then we had to adapt the boat and to reduce weight which we could because the boat was very strongly built."

Roura also asked for some personal preferences, like a big additional protective coachroof extension coaming wide enough to stop him getting wet.

"I hate it." He also centralised controls to a central tunnel.

He is clear on his next goals. "I want to feel successful on the next Vendée Globe. I have two clear goals, to  finish in the top ten and to round in under 80 days. That would be wonderful. To achieve this I have a powerful boat which is very fast. But there is no 'off' button. Once we are on the foils it is very quick. Now I have to get myself techncially and phsyically to the level of the boat."

With Lorient coach Leglatin at his side Roura will take his next steps, leaving a good two years to the start of the Vendée Globe but he hopes to learn a lot from the Route to Rhum at least climbing half way up the potential performance curve.
"We are looking to make a logical, incremental progression. Our team has grown a little, but we are still a small, tight team and that retains a huge level of enthusiasm. And we are still actively looking for additional sponsors who would come in alongside La Fabrique who have supported me from the outset.  They took all the risks to start with but there are lots of options, co-sponsorship is possible but we are not looking at it just as another income stream, we want companies who share our vision, to work with people who want to share with and be part of our special story, to join and benefit from the adventure."

For those who are interested Alan's story is captured in his movie in French on
https://vimeo.com/ondemand/alanrourafilm