> News > Christmas At Sea in the Vendée Globe

Since the first Vendée Globe, race technology and speeds have moved on immeasurably and that means that now, the fleet is even more spread out than before. But in particular Christmas at Cape Horn is now an achievable feat. In 2012, leader François Gabart rounded Cape Horn on January 1st, in 2016 leader Armel Le Cléac’h reached the release from the Pacific Ocean and the Big South on December 23rd, Alex Thomson on Christmas Day. Meantime Romain Attanasio and Sébastien Destremau were still at the longitude of Tasmania and between them, the fleet was stretched along the ice limit like a garland of Christmas decorations.

Gifts are welcomed but should not be too heavy, too big or too impractical.

One thing is for certain, roasting chestnuts on an open fire and roast turkey is for other years, but some skippers in particular make a point of celebrating Christmas, others just get on with the job. « We are in another space at the same time aboard out boats and really if we did not get a reminder from land, to put it bluntly, Christmas, we would not really care! », laughs Roland Jourdain whose first Vendée Globe was in the year 2000.

« During my first Vendée Globe (2004), I had to throw my Christmas dinner overboard because it was just not suitable ! We can still manage a small bottle of something even if we open it a bit later », smiles Jean-Pierre Dick, a four times Vendée Globe racer.    « Back at Christmas in 2000, we were a lot less worried about the weight of stuff we took with us », recalls Roland Jourdain. « Personally, I love comics. At Christmas, a friend had given me one that I devoured almost immediately. But I did not open all of my gifts and when I did the next day, I had a second comic but it was exactly the same! I have to confess the second blew overboard ‘accidentally’ !»

Cape Horn in sight (or almost)

In the 2016 Vendée Globe, British Alex Thomson became the first sailor who was able to say, « I got the best Christmas present ever, rounding Cape Horn on Christmas Day! »For his fourth Vendée Globe, the skipper was able to see how much time had been gained since Armel Le Cléac’h rounded the Horn in first place two days before.

« But unfortunately, the weather was so bad I wasn’t able to open any of my presents aboard Hugo Boss. And my satellite signal was so weak that it was hard for me to talk to anyone. I did however get a Christmas cake, which made a change from the freeze-dried food !», said a smiling Alex Thomson.

Your first Vendée Globe is a bit like your first kiss. Something you’ll never forget. « It was the first time I spent Christmas at sea in bad weather where there was not a moment of respite. You live outside of time in the Vendée Globe. The gulf between what we experience and what those ashore are feeling is extraordinary »,added Jean-Pierre Dick looking back to 2004. « We have to celebrate it for the press and the media. It is one of the highlights of the race seeing that even if we are missing our family, they are there with us. »

« I’m not the sort of person who would put on a Christmas hat », explained Marc Guillemot, who isn’t a fan of being alone at sea at Christmas. Just one quick phone call to the family and that’s it. « We are taking part in a race fighting against the elements and on Christmas Day, the wind doesn’t stop, nor do the waves. The environment in which we find ourselves imposes that, but Christmas is a moment to share with others », said the skipper who had just been involved in the rescue of Yann Eliès and had stopped on 25th December 2008 to repair his mast on an island in the middle of nowhere (Auckland Islands). « What I remember of Christmas day is that I was eighteen days away from Cape Horn in some rough weather ! » 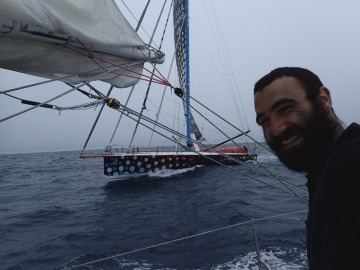 © DRHowever, there isn’t a single sailor who doesn’t have a story to tell, even if it is not their style to put on a big show for Christmas. « What brings us back close to home is our family and our children. It’s a bit of a downer », said Roland Jourdain. « Apart from that, it does you a world of good to get way from the consumerism of Christmas… I have even wondered whether it isn’t worth doing the next Vendée Globe just for that reason ! »

More used to being spread out by 100 to 500 miles from each other, solo sailors found it incredible when they meet up with each other in the Pacific to let a low go by. « We spent Christmas 2016 with three of our boats together. It was quite simply amazing and gave us a real boost ! », remembers the Swiss skipper, Alan Roura (one of the three skippers with Eric Bellion and Enda O'Coineen), the youngest skipper to have completed the Vendée Globe at the age of 23.

Having said that, he had spent most of his previous Christmases on a boat, but on one that had been moored up. Christmas 2016 was his first in a race out on the high seas. « When you celebrate it at sea, it means you are more or less halfway there or not far off. The hardest stuff is behind you. That’s how we need to look at it », stressed Alan Roura. « The Southern Ocean with the fantastic waves and magnificent colours… it will remain my best Christmas ever! It’s not everyone who gets to experience that. It’s a fantastic moment of sharing something with others and after 45 days at sea all alone, talking to two other skippers from a human perspective is great. It will forever remain a magic moment !».