Home News Alexia Barrier: ​"Under the step in my cockpit I have the box called the 'Yann Eliès' box"

Alexia, for the meantime here you are, you’ve reached your destination…
“And for the moment I’m in my element. Our preparation was done very quickly, in just a month and a half at Mer Agitée, Michel Desjoyeaux’s yard in Port-la-Forêt. We fitted the new keel four days before setting sail for Les Sables d’Olonne. With that and the new sails, my boat feels ten years younger. Really young. My assistants have done a lot of work on her. I tend to tell them now to stop working. They are just so good and I’m not used to that (laughs).I’m pleased as we are on schedule and my family is here with me and will be staying until the start in Les Sables d’Olonne. It’s great seeing the general public present in spite of the health crisis. It’s very touching. It’s a real Vendée Globe.”

You will have to learn about your new sails as you sail in the Vendée Globe ?
“No. In order not to have everything changed at the last minute, our sails are based on the same designs as those chosen by Romain Attanasio, the previous owner of the boat. Those old sails still work well, even if they’re quite old and over the past two years I have found my feet in the championship. The two gennakers are new, but I’m not too worried. The boat is not nasty or complicated and I know I’ll settle in with using these new sails as best I can. I have three sets of polars (potential speed projections depending on the sails and general performance of the boat – editor’s note): one for when I’m in the best of shape, one for when I’m completely exhausted and an average, which should enable me to set up my routing depending on how I feel at that point and depending on what damage I have suffered on the boat.” 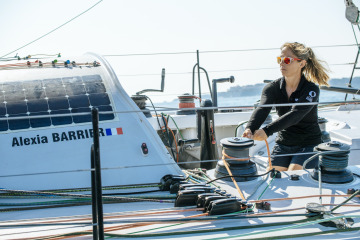 The Vendée Globe is said to be the Everest of sailing, but for you, Everest was actually getting here. So now the Vendée Globe is merely Annapurna for you?
(laughs): “I can’t wait to get out there and enjoy myself on 9th November. We have been working like crazy for two years. We’ve had some tricky times, but we kept smiling throughout, because it was us that created this challenge of being at the start of the Vendée
Globe. The race is bound to be enjoyable, even if I know it is going to be tough, that I’ll have moments of being afraid, that I’ll cry and that I’ll be tired. Everest is behind us and I’m tackling Annapurna now. I still have to reach the base camp to say that I have finished. I kep reminding myself that I’m going to have to remain fully focused even after rounding Cape Horn. Even if the hardest part is behind us after the third cape, there is still along way to go.”

Doesn’t the Southern Ocean frighten you more than that?
"In the Indian and Pacificque, there are 20m high waves, storms for the general public. I am not getting worked up about that. I jst want to be out there enjoying it all. Even if we have an idea of what lies ahead, you can’t plan what will really happen. You’d wear yourself out doing that.”

Why did you feel such a need to do the Vendée Globe?
“I have been thinking about it since the age of ten, maybe not every day when I wake up, as I have had other challenges from time to time, as a sailor, a businesswoman and president of an association. But the Vendée Globe marks some sort of continuity and I want to tick it off after the solo and double-handed and crewed transatlantic crossings and various victories. That’s all in the past. Now it’s the Vendée Globe. After that, I can’t say for the moment, but it is starting to take shape and I’ll think about it along the way. I need challenges and mountains to climb. It is me who chooses these mountains and I feel they are getting higher and higher. One day I’ll end up calming things down. Meanwhile, I need that to enjoy my life.”

Being one of the skippers in this Start Village and being in the thick of the action, the buzz, the anticipation and the excitement, is it already worth all the sacrifices you have made over the years?
"Anyone who undertakes anything to this high level must make sacrifices. In the end, it's a great pleasure to be there. Now I don't look back. I'm here, I have no regrets, I miss nothing in my life ". 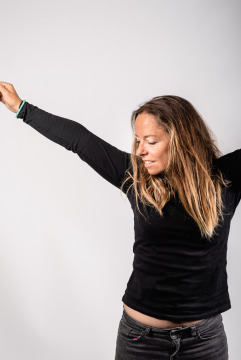 How is your medical kit made up?
“There are the mandatory requirements, some female specific medications, and some splints,because I do suffer from tendonitis from time to time. Plus there are some special things: I work for years with GIGN. I asked them for items complementary medicines, for  tourniquets, dressings. And bless the person who invented the stapler: when you have to stitch up a pig’s leg as part of the medical training and it takes ten minutes while you are sitting in a room. So imagine what it would be like at sea. And there are other solutions, such as the glue that replaces dressings, technologies which are new and special (I'm talking about the GIGN ones) which are easy to use, and lightweight ”.

Have you organized your first aid box on board?
"Under the cockpit step of my boat, I have the box called the Yann EIiès box. I have a special medical kit that I can reach without having to get into the boat. I've put water, food, and an extra jacket to warm me up, and the iridium phone also has a special place. All this is in case  an injury prevented me from getting inside the the boat. I can't thank sailors who had the courage to share their unhappy experiences, like Yann did after the Vendée Globe 2008 (fractured his femur) and I you learn to provision for being hungry, thirsty and cold with a broken leg or arm, and that you can't get below to take shelter".