This week marks the twentieth anniversary of the disappearance of the Canadian skipper Gerry Roufs. The last messages were received on 7th January 1997, not far from Point Nemo, the most remote spot in the South Pacific.

Violent winds in excess of 80 knots had hit the race leaders, including Roufs aboard Groupe LG 2, who was then in second place in the third Vendée Globe, behind Christophe Auguin. “The waves are not mere waves, they are the Alps,” Roufs had previously told the Race Directors. Isabelle Autissier was a hundred or so miles from the Canadian and had been in regular contact with him. When there was no news, she informed the Directors of her worries.

Fifteen boats took part in the third Vendée Globe, plus Raphaël Dinelli on Algimouss, who had not officially qualified. This edition was marred by a lot of damage with boats capsizing. The fleet encountered hellish conditions on Christmas Day, when Dinelli capsized in the Indian Ocean and lost his mast. He remained on the upturned hull of his boat for 36 hours until Pete Goss sailed upwind in nasty conditions to pick him up. On 5th January, Thierry Dubois and Tony Bullimore capsized and would only be rescued four days later by the Adelaide frigate… 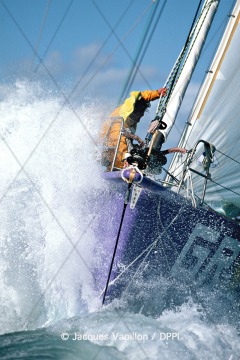 Isabelle Autissier on PRB was not far from Gerry Roufs, 43, and had been in contact with him.  PRB capsized three times. In his final message, Rofs talked about the hellish sea state. But then, there were no more messages. On 7th January, his beacon stopped emitting. The upturned hull Groupe LG 2 was spotted on 16th July 1997 and formally identified on 29th August 1998 off Chile. Parts of the boat washed up on Atalaya Island off the south of Chile.