Nandor Fa (Spirit of Hungary), 8th in the Vendée Globe

Hungarian solo skipper Nandor Fa brought his Spirit of Hungary across the finish line of the Vendée Globe at 10 hrs 54 m 09 secs UTC this Wednesday morning to earn an excellent eighth place overall. Fa, at 63, completes this epic eighth edition of the legendary solo non stop round the world race 24 years after becoming the first ever non-French skipper to complete the Vendée Globe. His elapsed time on Spirit of Hungary, which he designed himself, is 93 days 22 hrs, 52 mins, and 9 secs. He sailed 27,850 miles at an average speed of 12.35 knots.  He enjoyed an emotional reunion with his wife Iren and two daughters Lilli, 24, and Anna, 34, both of whom were tiny when their father first returned triumphant.

Fa finishes 6 days 1 hour 6 minutes and 20 seconds after seventh placed Louis Burton and has held eighth place since Christmas Day. The excellent result for the remarkable, proud Hungarian who started sailing on the lakes in his landlocked country is the product of a sharp, intelligent mind, steely resolve and determination. Fa’s story is one of the richest and most enchanting of this Vendée Globe. An incredible passion has driven him through sporting careers first in wrestling, canoeing and Olympic Finn class sailing before he took off to sail around the world for the first time in 1985-1987 in a 31 foot GRP cruiser as a silent protest at his nation’s exclusion from the 1984 Olympics because of the Russian boycott. During this passage, whilst off Cape Horn, he heard VHF radio traffic from the solo racers of the 1986-1987 BOC Challenge and there and then decided solo racing was for him. 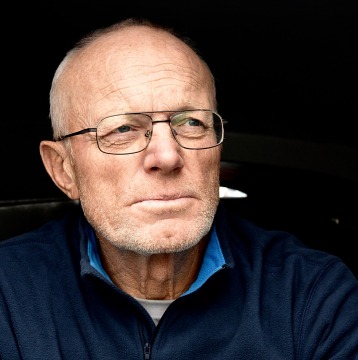 © Spirit of Hungary/ BWRHe was one of the pioneers in the second edition of the Vendée Globe, finishing fifth in 128 days, to become the first ever non French skipper to finish the race. His 1996, second attempt ended in painful failure after crossing the start three times. The ‘Everest of the Seas’ remained unfinished business for Fa. After raising his family and building and selling his successful businesses, Nandor Fa decided to come back to solo racing with a boat he designed himself and which was built ‘hands on’ in his native Hungary. Nandor Fa pushed his Spirit of Hungary hard but always knew where the ‘red line’ was. Similarly he backed himself when it came to making strategic and tactical choices but seemed to thrive on pressing hard with the group, the peloton going down the South Atlantic and in the early miles of the Indian Ocean. But so too he was adept at the discipline of looking after himself and his boat. In fact his eighth place in the Vendée Globe is notable for the very few technical problems he had and the way he dealt with them, for his and his boat’s durability and good average speeds. He passed boats early in the race through good average speeds and strategic choices, and gained places as others had to abandon their races.

His first few days were conservative and steady. At Cape Finisterre he voiced his frustration that he felt he had let some boats slip away, passing the NW tip of Spain in 21st place. He sailed east of Madeira in 18th place and, making good speeds in the trade winds, was up to 16th by the Canary Islands. Down the South Atlantic, skirting west of the Saint Helena high, Fa sailed well, as the ‘peloton’ which became the second group of boats, compacted in the relatively slow going and light winds.

Fa was content and confident in the Southern Oceans again. The Cape of Good Hope was a really bittersweet moment. Fa was up to 12th but emotionally he was hit when Kojiro Shiraishi had to retire when Spirit of Yukoh’s mast broke. A contemporary of Shiraishi’s late friend and mentor, Yukoh, from the days of the BOC Challenge, Fa told Koji ‘The Spirit of Yukoh goes on with me.’ Thereafter he had a close race, dicing with French skipper Stéphane Le Diraison on Compagnie du Lit – Boulogne Billancourt – for much of the Indian Ocean. Compromised by the loss of his A7 gennaker, Le Diraison was quicker downwind in the strong breeze but Spirit of Hungary was faster when the wind was forward of the beam. The pair saw each other and spoke on the VHF and by email. But for the second time he lost a close running mate. He was upset when Le Diraison lost his mast on December 17th under Australia. Suddenly he was much more alone. Louis Burton 600 miles ahead on Bureau Vallée and Conrad Colman 650 miles behind. Le Diraison’s retirement to Melbourne promoted Fa to tenth. The subsequent problems of Thomas Ruyant – whose Le Souffle du Nord pour Le Projet Imagine hit a container and suffered structural damage – and then Paul Meilhat’s SMA whose keel ram cracked, elevated Spirit of Hungary to ninth and then eighth. He has held eighth place since Christmas Day. 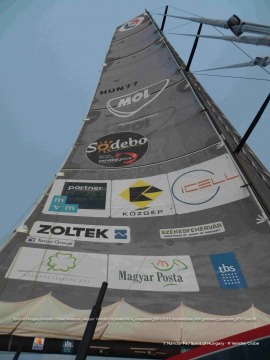 If his Indian Ocean was relatively quick, the Pacific was slow. Spirit of Hungary spent several days struggling to break through a transition zone and later had a spell in a high pressure system with only light winds. Nandor Fa rounded Cape Horn at 0638hrs on January 9th, his fifth time of passing the legendary great cape, four days and 23 hours after Louis Burton in seventh, 16 days and 18 hours after Armel Le Cléac’h. But it was in the South Atlantic, a few days after rounding Cape Horn that he probably had his biggest storm, encountering prolonged and slightly unexpected 50kt winds with gusts and squalls blowing off the mountains of the South American continent at more than 60 knots. Fa finally profited from the high level of reliability of his boat and his equipment, the very intimate knowledge that comes from having designed and being hands-on through all the build and successive re-fitting of his boat. He sailed very many hard miles on Spirit of Hungary and his very rigorous and careful approach to regular checks and routine maintenance throughout his Vendée Globe ensured he was on very quickly aware of any small problems before they became bigger. And with a very broad based set of skills and experiences gained over 35 years of ocean racing, Fa could turn his hand to all kinds of mechanical and soft repairs. In many respects his programme was strengthened by having his problems in the two year build up before his Vendée Globe. He suffered many teething troubles with Spirit of Hungary since it was originally launched in April 2014. During an initial Transatlantic delivery to New York for the New York - Vendée race there was substantial delamination. Rather than the essential transatlantic racing miles he had to ship the boat back to Hungary where the hull had to be strengthened and re-laminated.

Because of this, the boat was only just ready for the 2015 Barcelona World Race which he sailed with Conrad Colman, a late substitute co-skipper. The race proved more of an extended shake down, but they finished seventh with a much better knowledge of the boat. During the Transat Jacques Vabre the following November, Spirit of Hungary was dismasted early in the race. The heartache and long, long hours building, refitting, refining the IMOCA he designed himself engenders a unique relationship with his beloved boat that he refers to as his ‘third daughter’. Between these more recent tough experiences and his 1996 Vendée Globe which he started no fewer than three times before being forced to give up on the dock in Les Sables d’Olonne – Fa was hit hard by the damage and empathised with the consequent abandonments of other skippers. “My heart aches for him.” He said when his Japanese friend and rival Kojiro Shiraishi, with whom he had raced many miles down the Atlantic to the Cape of Good Hope, was dismasted. Under Australia he was suddenly alone when Stephane Le Diraison was also dismasted, the running mate he had sailed the Indian Ocean against, sometimes only a few miles apart. When the French skipper lost his rig he was just 70 or so miles ahead. As well as being one of the toughest, hardest and most experienced skippers out on the Vendée Globe race course, the gentleman Fa revealed his caring, human side, often the first to email a skipper or his team when they had to withdraw from the race. He enjoyed email exchanges and spoke with Kojiro, with Le Diraison and with his former co-skipper Conrad Colman. 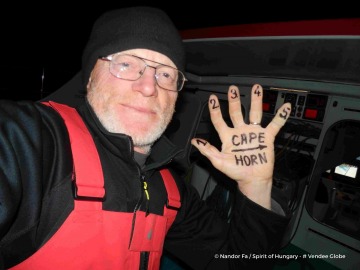 In his first week at sea he had some small problems with his computers and charging systems. On Day 26 he had to repair and reset his autopilot which was causing him to broach out of control. In one of these incidents he lost his favoured A7 gennaker which was to compromise his speed potential downwind in the stronger breezes in the south. He had a subsequent fight to save his J3 which he fortunately won. On Day 38 he believed he hit a UFO and lost the fairing from his keel blade. On Day 45 a chinese gybe was caused by a pilot malfunction and his old reaching kite was finally despatched to the sail locker no longer usable. This was one of his worst days as the engine cooked and he had to repair it before he could finally sleep again. Ten day later he lost his GPS antenna overboard but managed to fashion a replacement.

Fa finishes satisfied with his excellent race, a fitting swansong to a remarkable sailing career which has elevated him to become universally known in his native, landlocked Hungary but which has earned him massive recognition and respect around the world for his skill, passion, humanity, humility and fair play. Fa has always fought shy of highlighting his age. 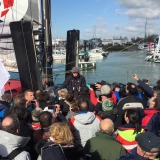 Rich Wilson into the trade winds

Conrad Colman back in European waters