> News > Coste : Forever the First to be Last

March 15 was the day Titouan Lamazou was crowned, forever the first winner. After him the end of winter of 1990 was punctuated by finishers Loïck Peyron who took second on the next day, then Jean-Luc van den Heede exactly 24 hours later. Philippe Jeantot arrived on March 20 then Pierre Follenfant on the 21st, that is after 114 days of racing. The youngster of the Vendée Globe at 26, Alain Gautier had worked hard to bring back his brand new aluminum Finot-Conq design in 132 days, whilst being heavily handicapped by spreader problems. But Jean-François Coste was just at Cape Horn while Titouan Lamazou was dropping his sails about to enter the channel in Les Sables d’Olonne. 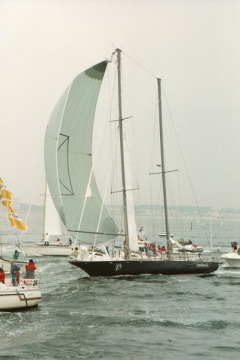 © Archives municipales des Sables d'Olonne / Jean-Pierre SénéPatrice Carpentier, Mike Plant, Bertie Reed, Jean-Yves Terlain, Philippe Poupon and Guy Bernardin might have made the wait for Coste shorter were it not the case that they all had to give up successively in South Africa, Australia, the Indian Ocean, in New Zealand or in the Falklands. Jean François Coste  needed much more time to bring Pen Duick III, the 17.45m monohull which Eric Tabarly designed himself and on which he won Morgan Cup, the Channel Race, the Fastnet and the 1967 Sydney Hobart. He really had to drag that two-masted boat with her 13.5 tonnes round the oceans. She had the most famous French navy captain and was built at the la Perrrière boatyard back in 1967.

Carrying out manoeuvres solo on her was not much fun and her average speed had been remarkable 22 years earlier when she was built, but that was no longer the case at the start of the nineties...

When Coste decided to race in the first Vendée Globe, he asked himself the following question: “Which would be best? Getting bored or getting annoyed with all the problems?” He chose and won over the boss of Cacharel promising him he had no chance of winning.

The Vendée Globe was just beginning and had no real history behind it. A famous sailing magazine believed that none of the thirteen adventurers would cross the finish line – the only comparison that could be made was with the Golden Globe Challenge in 1969, when only Robin Knox-Johnston completed the race and Jean-François Coste had already created something new for the race that would later enter the history books.

Denis Horeau*, who was the Race Director for the Vendée Globe, enjoys himself goes through the memories: “Jean-François knew that he was setting off on a long voyage to discover himself. He set sail with the idea of being the tail-ender, which was an idea he came up with as the concept pleased him. At the time, it seemed a bit odd, but since then, many other sailors have said they were only too happy to be bringing up the rear and it is indeed a special place, as it attracts the sympathy of the crowds.” 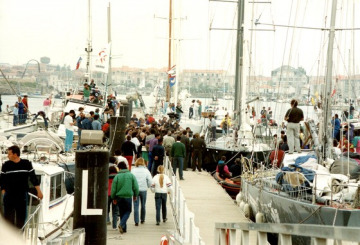 © Archives municipales des Sables d'Olonne / Jean-Pierre SénéFor a long time, Jean-François Coste had been seen on the pontoons and one day he introduced himself to Eric Tabarly, who liked taking youngsters aboard for his long voyages. Back then, he was the only one offering that kind of adventure. The son of a Parisian doctor raised by a governess, Gina, decided to enter the Vendée Globe Challenge adopting an intellectual approach to the task and his role. Denis Horeau: “he wanted to finish the race the “Costo” way (a shortened form of his name rather than a real nickname expressing in French how tough he was). He was destined to become a doctor and not mess around in boats. He was very cultured and unusual with his Parisian middle-class upbringing, meaning that he had to position himself differently from the others. That was something he enjoyed. He was happy to be doing something different, as he competed alongside the others.”

Alongside is not the right word, as he was particularly slow. So slow that on the northern quay in Les Sables d’Olonne, a group of gypsy musicians played for two or three weeks, hoping that the adventurer would quickly return to the harbour, after telling his story so well in the French paper, Libération. The bow of the mighty Pen Duick III finally appeared over the horizon on 8th May, a month after Alain Gautier, her predecessor, crossed the line.

“Costo had one of the most incredible welcomes imaginable,” declared Denis Horeau. All his friends were there: Poupon, Terlain and Lamazou all piled into a RIB to go out and meet him. I think that even Father Jaouen**, who was close to him, was also out on the water. All these friends and along the harbour wall a huge crowd gathered to welcome the first tail-ender. Costo had chosen that position. The cultured intellectual with the strange sense of humour had invented this character for the race and lived his life in that way.”

Four years ago, we met Jean-François Coste, a few days before the start of the eighth edition of the Vendée Globe. With his white hair, looking well-behaved and yet strangely rebellious, Coste had a look that was piercing. We talked to him about the new generation that was about to tackle the oceans. With his hands in his pockets and wearing a chequered shirt you would expect to see Clint Eastwood wearing, Jean-François Coste declared: “For me, there are three sorts of men who do the Vendée Globe: those are in it to win it, those who do it for the first time to see what it is like and those who want to fill a gap in their life.” Coste, never raced again in the Vendée Globe. An elegant way to remain the first tail-ender. 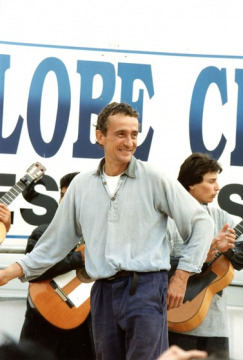 © Archives municipales des Sables d'Olonne / Jean-Pierre Séné
We had to look back at what he wrote in the log reports he compiled for Libération. One left its mark on Denis Horeau. He talked about a chance encounter with Jean-Yves Terlain, who had just dismasted. In the dark of night, while heading east, Coste noticed something glowing in the dark. The tip of a cigarette. Being smoked by a friend.
He wrote the editorial for the Vendée Globe Challenge book (published by Denoël) which also featured some brilliant writing from Libération (Patrick Le Roux and Luc le Vaillant), with photos taken by Philip Plisson.

Here is an extract: “It’s good to have various points of view. It is a way to share things. It is, and we don’t need to be any clearer, a way to communicate. It brings people together. In this case, it was something simple, elegant and authentic. An archaic approach pays off sometimes. When you communicate at sea, you are communicating a dream. Everyone has their own, even if it is a mere project.”

* Denis Horeau was the Vendée Globe Race Director in 1989, 2004, 2008, 2012. He founded Ambrose Light, a PR agency and events organiser, which works in the marine and sailing sectors. He is also the managing director of the International CleanTech Week Festival.

** Father Michel Jaouen, who died in 2016, was one of the most famous names in French sailing. He worked to help youngsters with problems get back to work by getting them to enjoy sailing and to be involved in boat repair work in l’Aber-Wrac’h (Finistère). A task that Jean-François Coste took up in the centre of France.