Home News Father Son And The Sea, Escoffier on Escoffier

Father Son And The Sea, Escoffier on Escoffier

Between the father, Franck-Yves Escoffier – himself a successful ocean racer with a string of Multi50 wins on his Crepes Whaou, and Vendée Globe competitor, son Kevin, there is a special and quite unique bond which was built on and strengthened around the sea, it is tempered by commitment, learning and sharing. Speak to them and their special bond quickly becomes apparent.

Franck-Yves: “A long time ago we left the Paris area with Annie, Kevin's mother, to go and live in Saint-Malo. And of course once you are there you can't escape the sea. Kevin, the oldest of our three sons, did not escape the lure and passion for the sea and raced as crew, not racing the Optimist like many competitors in the Vendée Globe. But he played rugby, that was his first love, and the real passion of the family.

Kevin (interjects): “Actually, let’s be fair, sailing was your real passion. You moved to Saint-Malo to try and make a living from sailing, and when you realized that it wouldn't be so easy to make a living from it, you chose to be a fisherman.”

Franck-Yves: "Well, yes, I already loved the sea, which came from holidays in Port-Mer, a beautiful little bay on the Cancale (NE of Saint Malo) side. We started on a very small wooden boat and sent the boys out to set their (crab) pots from a very young age, then there was a bigger one, an older and simple boat that we went around Brittany with - people almost took us for adventurers. Then there was a 1380 which allowed me to run the Atlantic Triangle (Saint-Malo - Cape Town - Rio de Janeiro - Portsmouth, his first race in 1975-76). Inevitably, when Kevin came along we took him on board, like his brothers Loïck and Yannick. For our holidays we rented a boat for two or three weeks. We had some fun times like a 50 knots gale in the middle of the night in Corsica. The boys toughened up and their characters built, rugby and sailing build our youth! In the end, that's how the connection to the sea was created. A few years later, I raced La Solitaire du Figaro, and they went with their mum, by car, to Kinsale (Ireland), then to Gijon (Spain). They were there with me at the stopovers, diving under Figaros to clean the hull bottoms and earn a hundred francs a dive ...

Kevin: “It was a kind of education, I suppose. Unconsciously, it was building a destiny. But really I think the birth of a real passion sneaks up on you and consumes you. In Saint-Malo as a kid I would go and touch the Route du Rhum boats. And I used to go fishing with dad and we would deliver crabs at night. All that makes you love the sea. I followed my passions and finished my (composite engineering) studies, and I went to do my internship Michel Desjoyeaux, whom I had met during dad’s Solitaire. There I found myself working on Vincent Riou's PRB. And since you raced with your dad you are no more stupid than anyone else, also you get  a reputation for being a tough guy because you play rugby and you and already race. That all pays off and you start to make a living from your passion.

Franck-Yves: “The Transat Jacques Vabre, which we raced together, was fabulous. Kevin oversaw the work of the boat, which was brand new as we left. And so we hit a whale which opened the daggerboard case. And then we had a mainsail track  problem. So downwind of Cape Verde Kevin climbed up to the masthead fixed it and and we went on to win, averaging 16 knots with a boat just out of the yard. Kevin was working for PRB at the time and  lived in Port-la-Forêt in a two-room apartment. Racing the Jacques Vabre and winning it was fabulous.

Kevin: "It's a great memory! I had already sailed with you on Gamin, the previous boat, on two Quebec - Saint-Malo transats. I learned to sail by feel with the electronics not quite calibrated.

The sea, a hard job

Kevin: “My parents taught us that whether you have talent or not, everything to you by hard work. You have to really push for things to happen. A lucky few who are gifted with a talent and luck may come up, but they are very rare. Work hard, realise it will hurt and be tough a lot of the time, but that's fundamental.

Franck-Yves: "Doing training or an apprenticeship at 25 is too late. It is still getting late at 18-20 years old, but it's better to introduce aspects of this job as early as possible. Asking my kids to go and put down their first pots telling them that it's going to be hard but that they are going to make some money, that's important. They're going to come home with swollen hands, after delivering three or four tons of crabs.

Kevin: "I never wanted to make fishing my profession, unlike one of my brothers (Loïc), who loves it. I used to go with my dad because I rarely say no, and because I know it builds your character. When I got home I was glad I went to sea and glad to be back, but I knew it wasn't for me. When you let us go fishing at 8 years old, it is clear that we could have hurt ourselves, but that risk was outweighed 10 times by the experience we got.  It's rare to achieve things that make you really good if you they have not been hard. The Transat Jacques Vabre with my father was a risk but those risks are very low compared to what you have for a lifetime of memories, to enhance the passion (for ocean racing) and just as a great experience. For me risk only relates to the reward. 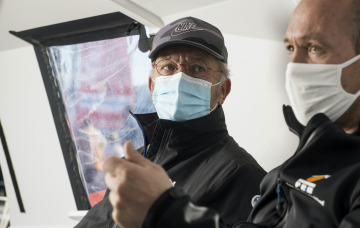 Franck-Yves: "That is not the same for everyone,  when it comes to this. There are people who like to take risks and maybe hurt themselves, and others who are totally risk averse.

Kevin: “Ocean racing is a little bit of a physical fight, but there is nothing masochistic about it: there is a goal to be achieved, a result. There are hard times often they outnumber the good times, but the fun times are of such a quality, such intensity, that it's worth the hard side of it. It's like drinking when you're really thirsty, like eating after you're really hungry: everything tastes better.

Franck-Yves: “On the Vendée Globe there are inevitably risks, but no more I think than crossing France on August 15 (the end of the holidays) by car while being tired. And this risk in the Vendée Globe, I think it is less than say when Kevin raced up to the bow to go clear the bowsprit on a Volvo Ocean Race doing 25 knots. I know there will be risky times, I will be a little worried from time to time. I know accidents can happen. We all know it, but I know the sea and I will be less worried than Annie, Kevin's mum, who worries about gale warnings. I'll be there to reassure her. Kevin has a big major asset: he just loves water. Annie would always tell me ‘Franck, you’re best at at sea, actually. You laugh at sea, you act stupid at sea, you are free at sea ". I became a fisherman not because I was passionate about the job, but so that I could make a living on the water. Kevin has that too: he's full on, giving 100 per cent all the time, and not the same on a boat anymore, and that's why he's a sought-after crew.

Kevin: “Ocean racing is about optimizing the time given to us over 24 hours, optimally. It's fantastic: you come back from 10 days at sea, you feel like you have lived 10 years. The return on investment is exceptional in terms of memories, in sensations. Occean racing, you just feel like you're fully alive! "

Translated from French article by FP